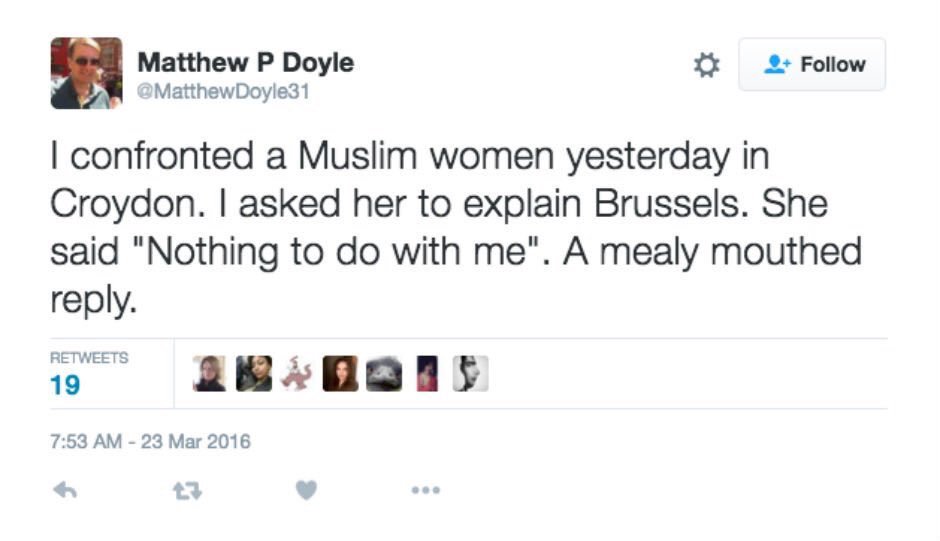 Another day, another twitterstorm. This time over a man – Matthew Doyle – who boasted of accosting a Muslim woman in the street and asking her to “explain Brussels”. She quite legitimately replied “Nothing to do with me” but Mr Doyle considered this “a mealy mouthed reply”. A less than amenable response quickly ensued on twitter. Since then, Mr Doyle posted the following in a tweet (which has now been deleted): “Who cares if I insulted some towelhead ?? Really.” Still on his twitterfeed sits this:

Thanks all you tweeters for proving I can still do PR.
I really was thinking about throwing the towel (head) in !
Contact @KimberleyeLeo

As a result of all this, the Metropolitan Police in Croydon tweeted the following:

So what are we to make of all this?

It strikes me that nobody appears to have covered themselves in glory during this unhappy episode (except, perhaps, the accosted Muslim woman who responded in a perfectly legitimate way). Mr Doyle’s remarks were ignorant, his actions unreasonable and his later slurs were particularly unpleasant. But the police response hardly fares any better.

Although there are those who want to argue all Muslims are the same and those who commit heinous acts like those seen in Brussels are not Muslim, the argument does not wash. Despite the majority of Muslims denouncing what took place in Brussels, and honestly believe those actions are incongruous with their sacred text, there can be no doubt that those who perpetrated these crimes believed themselves to be thoroughly Muslim and were drawing their ideology directly from the pages of Qur’an. Their views would not sit uncomfortably with the Salafi/Wahabbi strain of Islam. Other Muslims may argue (rightly or wrongly) such interpretations are illegitimate and wrong but there is no denying the views are drawn from the Qur’anic texts and sit within a theologically derived set of beliefs within Islam. This line of argument is akin to a Church of England communicant denying that a Methodist was a Christian of any sort because Methodists hold a minority view within Christianity and the CofE subscriber disagrees with their Arminian theology.

None of this, however, changes the fact that Mr Doyle is an ignorant cretin. Whether you agree with the above paragraph or not, nobody believes that the Church of England are apologists for Methodism who similarly are not apologists for Baptists who are likewise not apologists for Pentecostals. If such is true within Christendom – even within the narrower theological strain of Evangelicalism that covers each of these denominations – how much more should it be true of a British Muslim woman in relation to Muslims from a different country and culture, who come from a different theological background and who hold deeply divergent theological views on life and Islam itself. If every Christian cannot speak for every Christian, then it is certainly true that every Muslim cannot, and does not, speak for every Muslim. The differences only increase as we add different countries, cultures, backgrounds and theology to the mix.

Of course, Mr Doyle was not arrested for accosting an unsuspecting woman in Croydon. It appears he was arrested for the use of the word “towelhead” on twitter. Specifically, the police have deemed this to be inciting hatred. Without getting into whether racial and religious hatred laws are themselves a good thing or not (which is irrelevant to the police who merely enforce the law as it is given), the law itself states:

A person who uses threatening words or behaviour, or displays any written material which is threatening, is guilty of an offence if he intends thereby to stir up religious hatred.

Ignorant and cretinous as Mr Doyle’s comments were – offensive even as the word he later employed might be – it seems a stretch to argue that both the context and particular word used were threatening. Unpleasant, maybe. Threatening, not really. Similarly, stupid as the comments were, it seems unlikely Mr Doyle was intending to stir up religious hatred, even if his words were unkind and unthinking to say the least. I struggle to believe he was looking to incite anybody to attack or harm anyone else.

It has become the unfortunate and knee-jerk response to just about everything that we don’t like. Words and thoughts are banned and arrests are quickly made. I am not particularly impressed with the words of Matthew Doyle and I certainly don’t want to pretend they are anything other than unpleasant. But really, is being an ignorant cretin worthy of arrest? Ought we to ban someone from saying something, even if it is unkind and offensive, simply because we don’t like it? I have no problem with twitter erupting to mass denunciation of the comments, the joy of free speech is that folk can voice unpalatable views and the rest of us can tell them what we think of it. But to arrest and criminalise words and thoughts really ought not to be so.

The defence is easy when defending folk who hold views with which we happen to agree. It is straightforward when arguing for free speech for those who share our convictions and are saying things we believe the world ought to hear. Cases like this one will receive less backing because the words and views advanced are things most of us find unpleasant and unkind. Mr Doyle is not a sympathetic character and it is all too easy to view him as an unpleasant man making nasty comments getting his just desserts. The problem with such thinking – tempting though it may be – is if we won’t defend the right of even unpleasant people to voice nasty views, what confidence can any of us have that the views we do hold will always be permitted? As language evolves and social mores change, things we take as self-evidently moral may in future years be deemed unconscionable to even utter. It may be Mr Doyle today, on whom most of us agree, but tomorrow it might be a view much closer to home.

The fact is that free speech means nothing at all unless it includes the right to voice things that we do not believe. Speech simply is not free if it only includes those things that we agree with or, at least, that cause us no offence. It may not be glamorous to defend a man who voices slurs, and one certainly isn’t condoning his words, but whether we find Mr Doyle’s views offensive or not, it is in our interests not to criminalise him. He may be ignorant and his views may be unpleasant but unless he is permitted to voice them, you can kiss goodbye to believing and stating anything that is not mainstream.